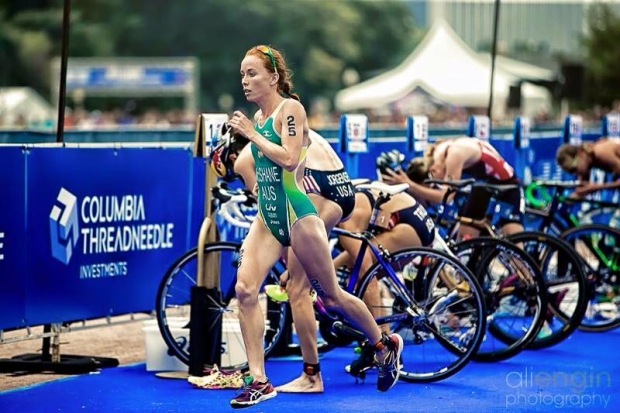 I was pretty excited heading into Chicago. After what felt like months of being stuck in a rut and facing disappointments a few weeks ago training really started going well again. I approached the World Series grand final as if I had nothing to lose. I hadn’t quite got things right since the start of the year but I finally felt like I was on the right track. 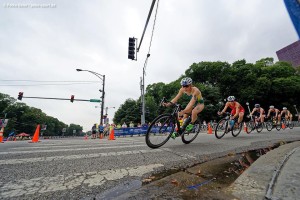 I had a relatively smooth start in the swim and although it is always so hard to know my position in the group I had the feeling I wasn’t far from the front swimmers. When we dived in for our second 750m lap I could see there was only a small group of around 10 ahead. I haven’t made a front group in the swim all year – in fact the last time I made a front group was in Chicago in June last year! So to say I started to get a bit excited at this point is an understatement. I knew that I’d be at the back of that group so I prepared to keep the pressure on through the second half of the swim and into the first lap of the bike to stay in touch with the leaders.

I got out of the water and I could see the lead group straight ahead. Luckily the few girls around me were as motivated as me to hang in and it took about ½ a lap to push forward safely into the front group. It was such a good feeling!! The bike course in Chicago is quite interesting as it is 9 x 4.5km laps with five U-Turns and eight 90 degree turns per lap. The constant braking and accelerating can really take a lot out of your legs. I focused on keeping a good position in the group and staying towards the front to minimise the extremes of speed changes. I made sure to contribute to the pacemaking to ensure we kept our gap on the groups behind. 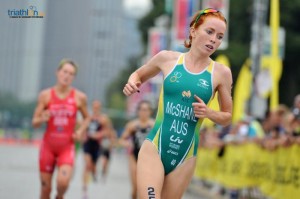 I was very confident about my run and I was excited to test myself. I had some really solid sessions behind me that I had done in the weeks leading up. The first 5km was good but I dropped back in the 2nd half of the 10km. The humidity was a challenge for my heat sensitive self and despite managing my pace wisely I think it took a toll towards the end. Although I was disappointed with my run I crossed the line in 13th with a smile. One good thing about having plenty of disappointing races is that you can really appreciate when things go close to how you wanted them to.

Last year in the Grand Final I finished 38th place, demoralised and confused as to where it had went so wrong. This year definitely hasn’t been perfect and there have been some rough patches but I’m happy I managed to finish the season with a race I can be proud of. I started the year just wanting to crack back into the top 20’s after I struggled so much in 2014. To have 5 x top 20 WTS results in 2015 proves that persistence is key with any goal. I feel like I still have a lot I can improve on and small mistakes can still be corrected but sometimes all I need is a few little signs along the way remind me why I do it. This past weekend in Chicago was one of those moments. 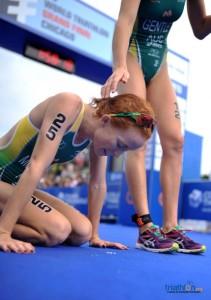 A huge thank you to my family, friends, the Wollongong Wizards, my sponsors and Triathlon Australia for the support and opportunities this year – and of course my coach Jamie Turner.

I ended up ranked 15th in the World Triathlon Series for 2015. 15th in the world is pretty cool 😀