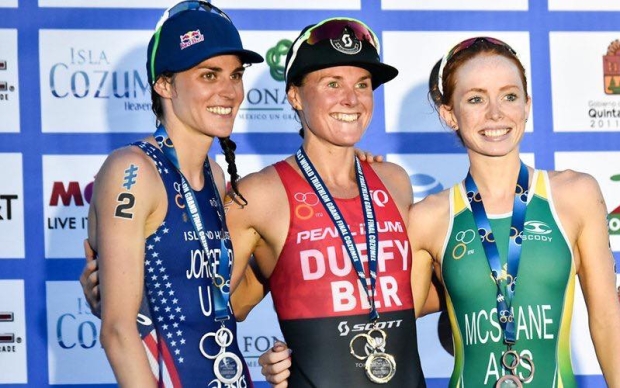 Cozumel was hot. Very hot. It was recorded at 33 degrees and almost 80% humidity before we started – with the water temperature over 30 degrees! This was obviously going to be a huge factor in the race. 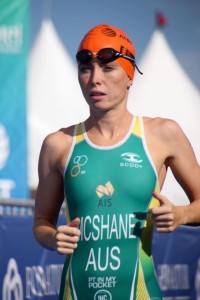 Pre race I directed much of my focus into my swim as I knew this would likely be key in performing well and could set up the rest of my race. Not having to work so hard on the bike to catch up to another group would mean I could preserve myself a bit more. I had a good start and had relatively clear water most of the way from the Caribbean sea into the Cozumel marina. It was the most beautiful swim I have ever done. The water was perfectly clear and the marine life was incredible (not that I took the time to enjoy the seascape on this occasion).

I exited the water and entered first transition within the top 20 but at the back of the group. This position forced me to work hard through the first lap (of eight) of the bike to secure myself within the big front group. There were three girls ahead of my group including eventual winner (and World Champion!) Flora Duffy. From 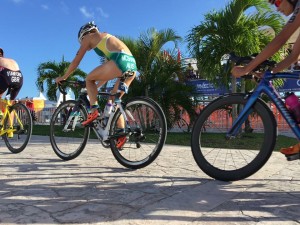 there I did my best to ride good position on the technical course to minimise chance of “bad luck” and also limit the severity of the accelerations out of the turns. I worked hard to make sure I was looking after myself as much as possible on the ride by sticking to my nutrition plan and constantly throwing water over myself.

I had one plan for the run: to start out conservatively and then run within myself to avoid over-cooking my body. I went out at what I thought was relatively slow and was surprised to find myself near the front a quarter of the way through the 10km course. I was surrounded by some really good runners so it did cross my mind that perhaps I had misjudged my pacing but I felt fine so stuck with it. We caught two of the three leading girls but Flora was still powering out front by herself. Recently crowned Olympic champ (and my training buddy) Gwen Jorgensen had also opened up a gap on us early on and was now sitting in second place. I was with three other girls as we started the second lap but we started to split up as we neared the 5km mark. My body was moving well and contrary to previous races in similar conditions the heat seemed barely noticeable at this point. I was actually starting to worry about how comfortable I felt! Nonetheless I stuck to my plan of running my own race and focused on myself. 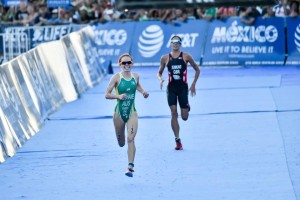 It wasn’t until the last lap that I actually realised I was running in fourth place and I could see current third position Helen Jenkins ahead of me who hadn’t put in any more time since I’d first dropped off. This was the first time I actually realised what position I was in! Immediately it occurred to me: “The podium is just ahead of me. I can see the podium!!’ For the first time, I focused on another athlete and  worked on putting in a surge and closing down the gap to Helen. I ran with her for a while, dropping off twice and surging back up in close succession well within the final 1.5km. I had a lot of confidence with my sprinting ability and I really backed myself…as long as I could stay with her until the finish was close enough to sprint. As we entered the ‘blue carpet’ with about 100m to go I surged one more time – as hard as I could – and fortunately for me Helen wasn’t able to go with me. 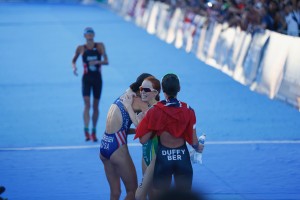 Running across the line I actually couldn’t believe I was in 3rd. I still can’t. It was an absolute honour to be on the podium next to two people I have huge admiration for: the 2016 World Champion Flora and, of course, Gwen. I can’t thank Gwen enough for the support, encouragement, advice, friendship and being the best training partner over the past 4 years.
There was a huge part of 2016 that didn’t go to plan for me and I really struggled with that for a long time. I thought about ending my season and heading home every day for months. What kept me going was the incredible support I received from family, friends, other athletes, sponsors, the Wollongong Wizards, my coach JT and the numerous people that contacted me. A couple of weeks ago I finally felt like I was back to my old self and I was ready to move on. 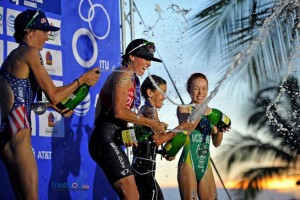 I guess what I’m most proud of is something that most people wont know. I’ve collapsed and ended up unconscious 3 times whilst racing due to heat stroke – the heat has always been a big weakness of mine. Part of me really believed I’d never perform well in hot conditions. A couple of years ago I enquired about specific heat stress training and testing and I was fortunate that the NSW Institute of Sport, Triathlon Australia and Jamie supported me in pursuing this. This year I did 3 months of heat specific training in the earlier part of the year along with sauna sessions. I’ve worked really hard over the past couple of years and researched everything I could on heat stress along with having the feedback of some awesome physiologists (including Katie Slattery, Ned Brophy-Williams and Annette Eastwood) . I learnt so much about how best to deal with the heat and what to avoid in the lead up to Cozumel. Honestly, I was so worried about it before the race and I am so proud of my commitment to preparing myself as best as I could. 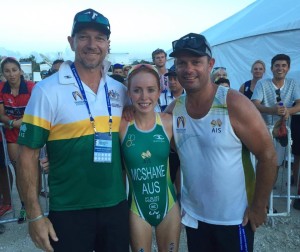 Finally, a massive thanks to my coach Jamie Turner. When I started ITU in 2010 I never ever believed that I would some day stand on a WTS podium… I didn’t believe that until this year. He’s backed me 100% and then some when I wasn’t capable of backing myself.