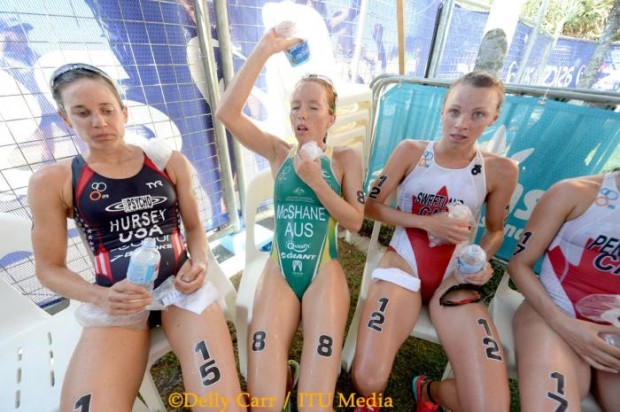 I have quite a history with Mooloolaba.

It was my first ITU race (and first WorldCup) back in 2010. I wasn’t quite ready for it, and as a result I was lapped out.

In 2011, after a year of working on my swimming I made my first ever front group only to be taken down in a crash in the first lap ofthe ride and wasn’t able to finish the race.

In 2012 I had another really good swim making the front group, to be again taken out by another rider about 100m in to the ride subsequently missing the group and ended up backin the chase group. I had a great run that day which just added to the frustration.

Last year, I just had a terrible swim, but rode and ran really well.

I was prepared to make 2014 my year! I love Mooloolaba – I love the course, the spectators and almost everything about it. It’s a course that I believe suits me quite well. Something that my body doesn’t love so much though is blistering heat. I think I’ll blame that one on my Scottish heritage. I’ve managed to get lucky over the last few years that it tended to be cooler and more ideal running conditions for me.

Saturday: not so much (despite being the half (sprint) distance). I had a good swim, quite an improvement on Devonport just 2 weeks ago, and I set myself up nicely in the first half of the 20km of the ride to join what would become quite a large front group.

And that’s when it got tricky. Half way in to the ride I started to experience an all too familiar feeling where my body started heating up uncontrollably, and I start to struggle to control my breathing and heart rate. As you could guess these symptoms add a great deal to the usual physical stress of racing.

I guess I’m lucky it was only a sprint distance, and I was able to get through it (albeit rather slowly & painfully) without too much damage to my body. I finished up 19th – a less than impressive start to the year…  But sometimes that happens. I’m happy to move on.