Posted 7 years ago by Administartor 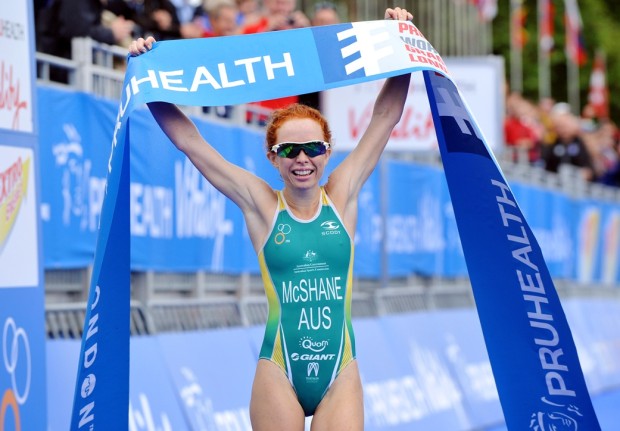 As you would all know by now my race reports typically conclude with my finishing position and my feelings about the result. I’m going to make exception today as my excitement to type out the following sentence cannot be contained for another page and a half. On Thursday I became the World U23 Triathlon Champion!!!

Ok, that felt good. This is how it went down:It was a 2 lap (very) cold swim in the Serpentine in Hyde Park, London. With awesome swimmers like Lucy Hall in the race, the swim was extremely fast and we had spread out quite early into the first lap. I exited the water over a minute down on Lucy, who herself had a large gap on the rest of the field. There were around 6 athletes already ahead of me, so I quickly got to work to chase them down. I wanted to ensure I was safely in the front group early on.

Towards the end of the first 5km lap, I had established myself in the first group of 19 girls chasing the lone leader. The ratio of chasers to race distance was not in Lucy’s favour and we had reeled her back during the late stage of the 40km course.I was SO excited. I knew that if I started the run with the leaders I had a good chance of a podium.

On the run a clear group of 9 of us ran together for the first 5km, with no one wanting to make a their move. I felt really good running, and part of me just wanted to go for it from the start, but the plan was always to remain patient. Slowly people were dropping off until only myself and 4 other girls were remaining with 2km to go. This game continued until the last U Turn at 600m to go. Ellen Pennock (Canada) who I’ve actually been training with over the last month took off really quickly. I immediately responded. After feeling super comfortable for 9.5km the pace change was a shock and I briefly questioned if I was able to keep that pace up the whole way to the finish. I quickly reminded myself that if I managed to stick with here until the blue finish carpet (around 100m to go) I had the preparation and the mettle to take anyone in a sprint. And that’s exactly what I did!

Honestly, I couldn’t really believe it had actually happened when I finished! It’s been a massive journey up until now, and I’d be lying if I said there’s not been more disappointments than anything else. But this one race makes absolutely every negative moment worth it!! Of course there is no way this would have been possible without the support of SO MANY people.

I can’t mention absolutely everyone who has helped me along the way, but a few special thank you’s to :

My family, my boyfriend Brendan Sexton (who not only inspires me but is so incredibly supportive)
My training group (AKA The Wizards) including, but not limited to, Aaron Royle, Ryan Bailie, Tamsyn Moana Veale, Grace Musgrove, Natalie Van Coeverdon & Gwen Jorgensen who are just incredible athletes themselves that it’s always easy to stay motivated everyday
Triathlon Australia
all of the service providers (including Paul Penna, Alex Price, Adam Radford, Aaron Lean)
Craig Redman who first encouraged me to give ITU a crack
my awesome sponsors (Quorn, Scody, Liv/Giant, Spearman Cycles, Lightweight wheels, Saucony, Spiuk)
and of course my extremely patient coach Jamie Turner. He’s backed me more than anyone in the last 4 years, when I didn’t even back myself. His knowledge and support was paramount to my result on Thursday and I couldn’t be any more grateful.Thank you everyone for the support from your new WORLD U23 TRIATHLON CHAMPION!!!!!!! 😀